Skip to content Skip to sidebar Skip to footer
Gleanings
0

“I am the resurrection and the life. He who believes in Me, though he may die, he shall live. And whoever lives and believes in Me shall never die. Do you believe this?”
John 11:25 NKJV:

I Am The Resurrection And The Life

“I am the resurrection and the life.” Jesus declared!

This is the basis of our expectation. Lazarus’ story only happens to serve us as an illustration. Even if there was no Lazarus, He is still the Resurrection and the Life. He is the life, He is the essence of living. He also is the Resurrection! When you touch Jesus, you have touched the life and you have touched the resurrection and the power that raises a man from deadness. The life that quickens the dead and forestalls every decay. Himself is the resurrection. When He comes in, there must be a resurrection. “He who believes in me, though he may die, he shall live…” What an assurance and a definite word! Though he may die, though he may decay, he shall live.

Whoever Believes In Me Shall Never Die

And whoever lives and believes in me shall never die! He is the Sustainer of life. He is the One that keeps a man ever fresh and in continuous revival. Look unto Him and you will never die again. I speak not of the death of our mortal bodies but of your spiritual life and of your communion with the LORD! We can trust Him to keep the fire burning and to keep us ever-fruitful even at our old age. He is the Resurrection and the life: do you believe this?

You may have believed many other things. You may have quietly postponed the time of visitation for your life till the “by and by”. You may have given up every hope of recovery and restoration but hear Him authoritatively declare…

“I am the resurrection and the life… Though he may die, he shall live and if he lives and believes, he shall never die… Do you believe this?”

This is the crux of the matter. Every death and decay must give way when He comes… Even ordinary Elisha died and his dry bones in the grave still carried a remnant of this resurrection life. A dead soldier was mistakenly dropped in his tomb and on touching Elisha’s dry bones, the man revived and walked away. Elisha only received a double portion of the spirit of Elijah but this man, Jesus, did not receive the spirit by measure. He carries a measureless, inexhaustible anointing!

It pleased the Father that in Him should all the fullness of the Godhead dwell. Out of His fullness – out of His own store have we all received grace upon grace. John the Baptist was the greatest of all the prophets but he confessed that the latches of His shoes, he was unworthy to unloose. It is Him, who is the firstborn of every creature. He that was with God, in the beginning, He is the WORD that became flesh, He made all that was made in the beginning. There is nothing that was made that He did not make. Even God the Father reverenced Him and adored Him. To the Son, He said:

“Thy throne O God, is forever and ever: a scepter of righteousness is the scepter of thy kingdom. Thou hast loved righteousness, and hated iniquity; therefore God, even Thy God, hath anointed thee with the oil of gladness above thy fellows.” Heb. 1:8-9.

He is the “I AM!” Before Abraham was “I AM…”, was His declaration. He is the only one that can bear “I AM…” And He said … “I am the Resurrection and the Life; he that believeth in me, though he were dead, yet shall he live…” 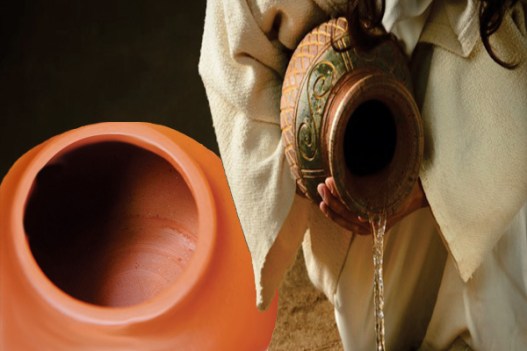